Microsoft launched today a shiny new code editor for Windows, OS X, and Linux: Visual Studio Code. It's a smart looking text editor with IntelliSense support, git integration, and a few other bits and pieces that developers will enjoy.

What Microsoft didn't say when announcing the new editor was how it built Visual Studio Code. In a move that might seem a little surprising, given the regular animosity between the two companies, the editor is built on top of Chromium, the open source version of Google's Chrome browser.

The app is built using an open source desktop application framework developed by GitHub called Electron. Electron uses HTML5, JavaScript, and other Web technologies, using Chromium for presentation, and io.js (a fork of node.js) to tie it all together. GitHub has an Electron-based editor called Atom, and Visual Studio Code is based on it.

[deleted]
Microsoft is moving fast these days. I have to hand it to them.

The Verge - All Posts

Microsoft appears to be readying some significant changes to its next version of Windows. Paul Thurrott reports that Microsoft is planning to make the Start menu available as an option in the next major Windows release, currently codenamed "Threshold." The Start menu change will follow a recent reversal that Microsoft made in Windows 8.1, bringing back the Start button UI. It’s not clear if the Start menu will be made available for all versions of Windows Threshold, and Thurrott speculates it may appear as an option for those that only support desktop apps.

Further Threshold changes appear to include an option to run Windows 8-style ("Metro") apps on the desktop. Currently, the new Windows 8-style apps can run alongside the desktop, but the next version of Windows is said to expand this greatly by allowing Metro apps to float as separate windows on the desktop. Third-party tools like Stardock’s ModernMix already support this, but it appears Microsoft will add it natively to provide more flexibility for its new style apps.

Separate versions of Windows for consumer and business

On the topic of Threshold, ZDNet is also reporting that Microsoft is moving to a simplified version of Windows for consumers, including a version focused on Windows 8-style apps that’s updated frequently and available for ARM-based Windows tablets, PCs, and Windows Phones. A more traditional consumer version will be designed for the current PC market and fully support existing desktop apps. A separate enterprise version will include the policy management and enterprise features that you’d expect, but it’s not designed to be updated as frequently as the consumer SKUs. The Verge can confirm Microsoft is investigating separate consumer and enterprise versions of Windows.

Microsoft’s Windows "Threshold" version is expected to debut in spring 2015.

joshpennington
reply
Well they need to do something to move more units of Windows.
Saint Joseph, MI

henrypootel
reply
ugh - why? if you have a keyboard, use that, if you have touch, the 'metro' start thing is better anyway. why bring back the horrible menu?
Auckland, New Zealand

cbenard
reply
This would cause me to think Windows 8.x is an acceptable migration path.
Plano, Texas

Tired of Hearing about Obamacare? Turn Off Fox. » Sociological Images
Tuesday December 10th, 2013 at 9:07 AM

Yesterday the Pew Research Center released data on the news coverage of Typhoon Haiyan — a disaster that has killed at least 4,000 people — and the bungled Obamacare website roll-out.  Comparing 20 hours of news coverage over four major U.S. channels, they found dramatic differences.  The data below shows the hours and minutes spent on each topic at each channel (red = Obamacare, yellow = the typhoon). First, the two partisan channels (Fox News and MSNBC) gave more time to Obamacare than the typhoon.  On MSNBC, there was four times as much coverage of Obamacare.  On Fox, there as a stunning 80 times as much coverage.  Al Jazeera America and CNN spent significantly more time on the typhoon, likely reflecting their more global focus and less of an ideological mission.

The channels also differed in how much time they spent on facts/reporting versus opinion/commentary.  Check it out:

While most all of us sometimes lazily refer to “the media” as if it’s a homogeneous thing, it’s important to remember that our perceptions of reality are strongly shaped by which media we consume.

When News and Markets Collide

Who Benefits from Government Programs?

Marijuana: A Short History of Changes in Law and Public ...

While Microsoft has struggled in its transition from PCs to devices, this week's releases of Windows 8.1 and Surface 2 suggest that the firm's strategy is sound: Give 1.5 billion PC users a path forward into the post-PC world. 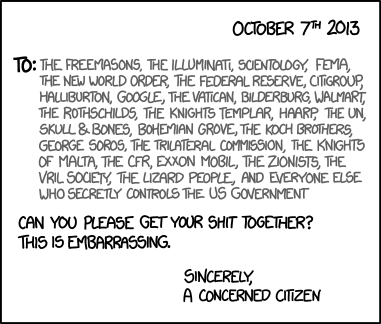 Demagog
reply
Well, but where is MiB and Greys and a lot of other secret rulers of the (not-so-good-site) of the Atlantic Ocean

reply
Maybe all the organizations the control the US government are too busy arguing with the other members of the cabal to get organized?
Florida

MEVincent
reply
If only this were true...
Manassas, Virginia

yashimii
Lols. If it wasn't so sad.

ashtonbt1
reply
Word. This is amazing.

Alt text: "Are you ok? Do you need help?"
Jersey City, NJ

Following the announcements of SteamOS and Steam Machines earlier this week, Valve has concluded its trio of surprises with today’s unveiling of the Steam Controller. While numerous folks had anticipated Valve revealing some type of gamepad, I highly doubt anyone expected to see a design quite like this. The controller is free of the traditional analog sticks and directional buttons that most of us have grown accustomed to. Instead, it features two slightly-concave, circular trackpads on each side, similar to that of which you would find on a laptop computer. The controller uses a “new generation of super-precise haptic feedback” to compensate for its lack of physical analog sticks. Valve equipped each trackpad with linear resonant actuators that are ”capable of delivering a wide range of force and vibration, allowing precise control over frequency, amplitude and direction of movement.” Basically, the gamepad will use complex vibration mechanisms as a means of more exceptional control. Quite a long way from Nintendo 64 “Rumble Paks,” wouldn’t you say? The Steam controller also includes a high-resolution touchscreen at its center. The touchscreen, like the PlayStation 4′s, is clickable, but as an added bonus also operates as a display.  According to Valve, ”The screen allows an infinite number of discrete actions to be made available to the player, without requiring an infinite number of physical buttons.” While using the touchscreen, its display will be overlaid on your television to prevent you from having to repeatedly look down.

If there’s one thing Valve has made clear this week, it’s that it plans to make all of its hardware extensively open. The Steam controller was designed to be fully “hackable,” and Valve plans to ”make tools available that will enable users to participate in all aspects of the experience, from industrial design to electrical engineering.” The Steam controller will also be compatible with the full catalog of Steam games currently available and will include legacy support for old games with no gamepad support.

At first glance, the Steam controller definitely raised my eyebrow because of its abstract design. But I’m definitely excited to give one of these a try to see if they’re a worthy alternative to your typical PC peripherals or gampads. Valve claims that the Steam controller tricks games into thinking that it’s a keyboard and mouse, but can it fill the void for what PC gamers have become accustomed to? Will the controller catch on with folks who typically use traditional, analog stick-inclusive gamepads? We’ll all find out sometime next year, but in the meantime there’s still a chance for 300 of you to beta test one, along with SteamOS and Valve’s prototype Steam machine.

There you have it, ladies and gentlemen; Valve’s three big announcements that it believes will change the way games are played in living rooms forever. This has been an exciting week and a paramount one for the gaming world; How do you feel about the Steam controller or Valve’s other ambitious unveilings of this week? Be sure to leave your thoughts and concerns in the comments. Now let’s all get back to waiting for the imminent announcement of Half-Life 3. That’s right, don’t give up hope yet!

joshpennington
reply
This really irritated me. No Half Life announcement at all?!?
Saint Joseph, MI